IMLAY CITY — Imlay City Police are investigating an incident of vandalism that took place at a downtown business sometime late Monday or early Tuesday.
Police responded at around 7 a.m. Tuesday (Oct. 15) morning to New Image Linen Service at 153 N. Almont Ave., where someone had spray-painted graffiti on the building’s walls and company-owned vehicles parked outside.
The business had only recently undergone a complete renovation and makeover of the building’s facade. 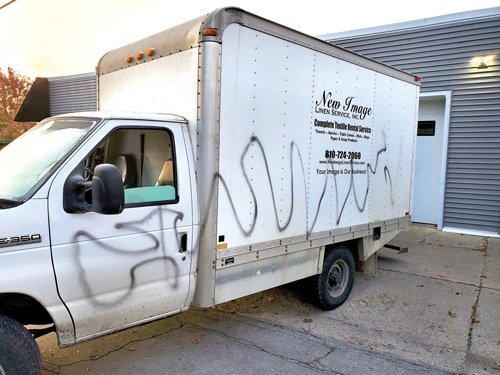 This ‘New Image’ delivery truck was one of three company vehicles to be vandalized during the night on Monday, Oct. 14. Damage to the vehicles and the business’s exterior was discovered by employees on Tuesday.

Building/business owner Dave Scampini said employees arriving for work informed him of the damage at around 6:45 a.m.
“I was the last one to leave at around 9 p.m. on Monday,” said Scampini. “So I’m sure it happened sometime in the middle of the night — but before the frost had set in.”
He added that three company-owned vehicles had also been spray painted, including two delivery vehicles and a passenger car.
Imlay City Officer Corey Martin said he was called to the scene at around 7:20 a.m. and was surprised by the extent of damage inflicted to the building and vehicles.
“They had just finished all that work and had it looking great,” Officer Martin said. “It’s a lot of damage; not only to the building, but to three vehicles that are probably going to have to be repainted.
“From the way it looks,” he said, “it appears that someone targeted this particular business.”
Scampini said if he cannot find a product capable of removing the paint without damaging the brand-new siding, the affected siding may all have to be replaced.
“We’re probably looking at more than $20,000 in damage,” he said. “I would like to see the person that did this face some very serious criminal felony charges.
“Anyone who would  inflict this kind of damage should be charged to the full extent of the law,” Scampini opined. “It’s very frustrating.”