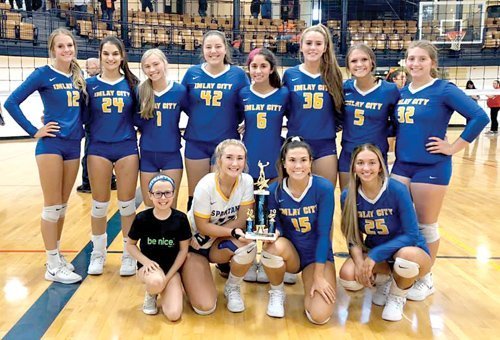 The Imlay City volleyball team poses for a photo after winning the Silver Division title at Mount Morris.

Those outcomes landed them a Silver Division appearance.
It was there Imlay City registered an 18-25, 25-23, 15-13 semifinal triumph against Mio.
They then faced Garden City for Silver Division honors next.
When the final point hit the floor, Imlay City picked up a 25-18, 25-17 victory.
Emma Sellers led Imlay City with 30 kills, three solo blocks and five assisted blocks. She was backed by Natalie Giglio (24 kills), Rylee Dingwell (44 service points, including 11 aces, 30 digs and 23 kills), Abigail Thibodeau (66 digs) and Baylee Wetzel (74 assists along 33 service points, featuring 11 aces).