IMLAY CITY — The bell tower at Imlay City United Methodist Church, 210 N. Almont Ave., is undergoing a makeover.
This week, workers from Genesee Roofing began removing and replacing the bell tower’s deteriorating cedar shakes and decorative louvers.
The church’s pastor, the Rev. Dr. Marcel Lamb, said the project had been in the planning stages for some time, but finding a contractor and the needed funds to accomplish the task merged only recently.
Rev. Lamb said the church was the recent recipient of a generous bequest from a local family, whose donation enabled the congregation to move forward with the upgrades to the bell tower. 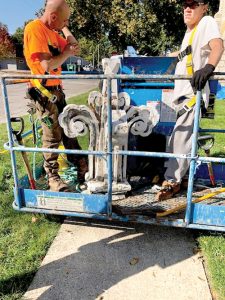 As part of the project, workers removed the church’s cross-shaped finial, which will be repainted and restored to its original luster.

“We received the memorial bequest during the past year,” said Lamb. “We are truly grateful to the family for the very generous contribution.”

He noted that it was not easy to find a local contractor willing and able to tackle the complexities of the project.
“A lot of contractors did not want to take it on,” said Lamb. “There aren’t many who can do this kind of work, and the cost of doing it is steep. We are appreciative of Genesee Roofing for stepping up.”
Along with the ongoing bell tower renovation, workers temporarily removed the church’s iconic cross-shaped finial at the top — which is undergoing a restoration of its own.
“The finial was removed to strip the rust and old paint off and to repaint it fresh,” said Lamb.
The renovation coincides with Imlay City United Methodist Church’s 140th anniversary celebration.
Longtime Imlay City resident/historian Marilyn Swihart said the church was organized in October of 1879, with a brick building being constructed between 1882-83 at a cost of $2,500. At the time the church had 57 members.
In October of 1957, the church’s exterior was covered with perma-stone facade at a cost of $8,400.
Swihart noted that
the church has weathered the years virtually unscathed.
The exception being  in 1973, when lighting struck the church’s bell tower, resulting in about $2,400 damage.
Rev. Lamb said the congregation officially marked its 140th anniversary with a special celebration on Sunday, Oct. 13, that included an acknowledgement of the family that bequeathed the funds being used to rehabilitate the church’s bell tower.