Truck collides with stopped school bus on Bowers Rd.
ATTICA TWP. — A 64-year-old Attica Township man died Wednesday, October 9, after colliding with a stopped school bus.
The Lapeer County Sheriff’s Office reported that Richard Gonda’s pickup truck struck the back of an Imlay City Schools bus on Bowers Road, west of Lake Pleasant Rd. around 4:20 p.m.
After being extricated from his 2001 Ford F-150  by Attica Township firefighters, Gonda was taken to  McLaren Lapeer Hospital by ambulance where he died from his injuries.
The bus driver and four elementary-aged students on the bus at the time of the crash were not hurt.
“The bus was stopped upon the roadway within the eastbound lane of Bowers Road. The flashing red lights were activated and functioning appropriately. The stop sign on the left side of the bus was extended outward. A student just exited the bus and was released to a parent,” the sheriff’s office stated in a press release. 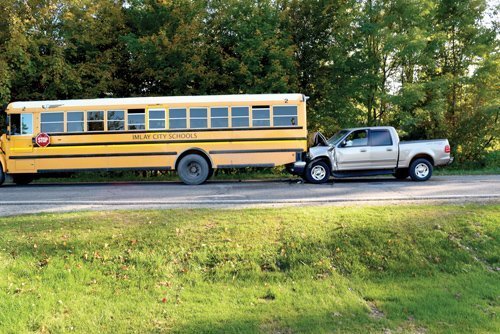 The Imlay City Schools bus driver and four elementary-aged students on the bus at the time of the crash were not injured.

“There were no indications of braking prior to the collision.”
Investigators say they don’t believe alcohol, drugs or excessive speed were factors in the crash.
On Monday, Det./Sgt. Jason Parks said it’s still not clear why Gonda’s vehicle struck the bus.
The Lapeer County Medical Examiner’s Office conducted an autopsy the following day and confirmed that medical distress was not a factor in Gonda’s death but that he died from injuries sustained in the crash.
“We’re obviously thankful that none of the children on the bus were hurt but it was a scary situation for them,” Parks added.
He noted that school buses are designed to transfer the energy created in a collision to the underside of  the vehicle to better protect students in the passenger compartment and the Imlay City Schools bus appears to have functioned as it should in this incident.
Imlay City Schools made arrangements for
the driver and students to be transported from the scene.
Departments assisting on scene included Michigan State Police, Attica Township Fire and Rescue and Lapeer County EMS.
Bowers Road between Lake George and Lake Pleasant roads was closed to traffic for more than an hour for rescue and investigation purposes.
The accident remains under investigation by Lapeer County Sheriff’s deputies.
According to Gonda’s obituary, he was a 1973 graduate of Imlay City High School and retired from a 33-year career with Ford Motor Company in 2007. Funeral services were held on Monday, Oct. 14, in Lapeer.