to Yale in BWAC road clash

IMLAY CITY — Imlay City handed host Yale a 27-3 setback in a Blue Water Area Conference varsity football game last Friday night.
With the result, Imlay City goes to 4-2 and 3-2. Yale slips to 1-5 and 1-4.
“This was the most complete game we have played all year,” Imlay City Coach Brian Tresnak said. “We started out a little shaky on offense at the beginning but once we got over our nerves and settled in we started to move the ball,” he emphasized.
“Defensively, we had another solid outing and were able to force some turnovers.”
In Friday’s game, Yale took a 3-0 edge after one quarter was over with.
Imlay City then countered with a 14-0 advantage during the middle two quarters. good for a 14-3 cushion with 36 minutes gone.
The visitors then outscored Yale 13-0 the rest of the way, closing out a 27-3 win. 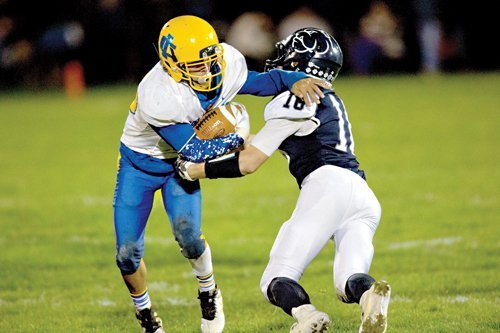