Read all about it in Dryden

DRYDEN — All that’s red and black gets covered in The Dryden Red and Black, Dryden Jr./Sr. High School’s student newspaper. The three-year-old publication is delivered to email inboxes every Monday morning during the school year.
Junior Miya Wolff and senior Kylie DeVlaminck are in their second year as editors, heading up a team of seven total student contributors.
The Dryden Red and Black—named in honor of the school’s colors—features news and announcements from student groups like Student Council and National Honor Society; sporting event recaps; a calendar of upcoming events and details about fundraisers and special happenings; the lunch menu; and more.
“There are interactive sections too that lets our readers give feedback and we have a ‘riddle of the week,’” Miya said.
Kylie added, “We also feature a ‘Student of the Week’ with fun facts about them. It’s a great way to learn about other people in the school.”
When special guests address a Senior Seminar class, the newspaper features a student reflection paper detailing the school, career and life advice they’ve been given.
Before going digital, the newspaper staff created print copies of the paper and placed them in the school office, library and commons. Now, using the ‘Smore’ online newsletter template, the paper is delivered simultaneously to all 6-12 grade students, their parents and school staff. 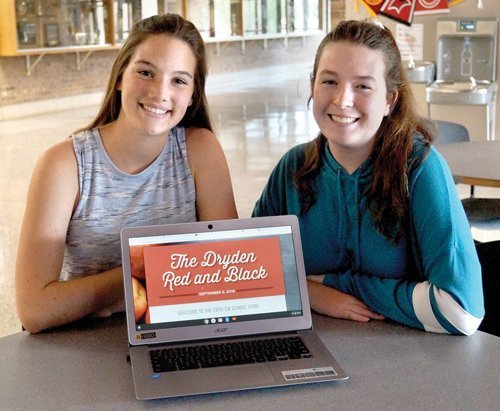 Kylie DeVlaminck and Miya Wolff are in their second year as editors of The Dryden Red and Black, the junior/senior high school’s newspaper that gets delivered via email to all students, parents and staff every Monday morning.

“Now that it’s digital we can put in more information and do a lot more with photos, include using color photos,” Kylie said.

When the Dryden Red and Black was first created by Jesse Prososki, a 2019 Dryden High School graduate, they had a smaller staff and that made it challenging to put an edition together every week.
“We started with just four or five people but we’ve evolved in just three years and having the extra help makes things easier,” Miya said.
Currently, the staff includes reporters Ava DeVlaminck, Charlie Fliedner, Robbie Fliedner, and Madison Maday and photographer Alaina Penn.
The editor team says they’d like to eventually extend their coverage to the elementary school level and make the Dryden Red and Black a district-wide paper.
“We hear from a lot of alumni who say ‘we wish the paper existed when we went to Dryden,’” Kylie said.
Miya said she decided to join the newspaper staff when Prososki asked for her help and she thought “it would be something cool to be a part of.”
Kylie said she likes the fact that the newspaper helps connect people and keep them informed.
“I like to be involved in my school and it’s fun to work with other students and share what’s going on,” she said.
Although a career in writing or journalism isn’t part of their future plans, both editors believe they’ve gained a lot personally from their experience.
Miya still has some time to figure out her post-graduation plans but she’s leaning toward a career in mechanical engineering. That’s probably why she said she enjoys the whole editing and formatting process.
Kylie is on track to study clinical and diagnostic sciences with a pre-med concentration but she wants to help others develop a love for the written word or, at least, compose a good essay.
“I really like writing. I plan to volunteer in my college’s writing center and help other students,” she said.
A link to the Dryden Red and Black is posted every Monday on the school district’s Facebook and Twitter pages.