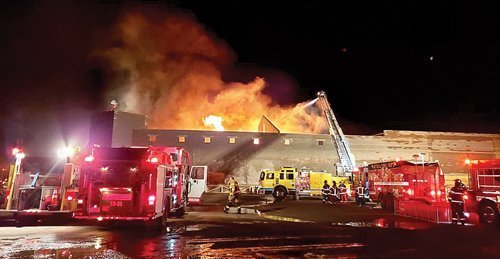 Fire broke out at Country Smoke House shortly after midnight on Friday (Oct. 4), resulting in extensive damage to the building’s meat processing area and retail space. Photo by Amanda Szymanski

ALMONT TWP. — Steve Francis, owner of the fire-ravaged Country Smoke House, vows to rebound from the fire and other recent events that have left him and family members reeling.
On Friday, Oct. 4, an early-morning fire broke out at the Country Smoke House, causing extensive damage to one of the area’s most successful and popular businesses.
Almont Township Fire Chief Don Smith said firefighters from six local departments responded to the scene at around 12:03 a.m.
Smith said the fire appeared to have begun in the rear of the building’s upper level, where a large portion of the building’s roof had been impacted.
He estimated that as much as 90% of the business’s retail space and meat processing area were damaged by fire, smoke, heat and water.
Fire Capt./Incident Commander Jeff Ludwig said the specific cause of the fire remains unknown, pending an investigation by Michigan State Fire Marshals.
“There is nothing to suggest the fire is suspicious,” Ludwig noted, “but it will need to be investigated before we can provide more specific details.”
By around 7 a.m. on Friday, many of the business’s 80-plus employees  reporting for another day’s work, clustered together in small groups, sharing hugs and pondering their futures in the fire’s aftermath.
Some of them described business owners, Steve and Sue Francis, as “being family” and pledged their continued support during what is typically the busiest season for the local deer processing business.
“This place and the people who work here are my family,” said one distraught male employee. “I’m ready right now to start the rebuilding.”
At the scene, a somber Steve Francis, who in the days before the fire had endured a heart attack and the loss of his father, expressed thanks to his employees and the community for their support.
He simultaneously vowed to rebuild and be back stronger than ever.
“My wife and I have been at this location 30 years,” he said. “We’ll fight through this and rebuild. It’s not going to take us down.”
On Monday (Oct. 7), Steve Francis said he is communicating with other local businesses in hopes of continuing to meet the needs of his customers.
He’s also concerned about his employees, who suddenly find themselves out of work as the busy deer hunting and holiday seasons approach.
“I’ll probably know more about what we can do to take care of our customers and employees by sometime next week,” said Francis. “Just trying to work some things out.”
In response to the outpouring of support from the community, the Francis family posted the following “thank you” on their Facebook site.
“Our hearts are so full and amazed by all the love and support from friends, customers, family, community and businesses,”  they said. “We will rebuild and cannot wait to open the doors for all of you. Thank you for all the prayers and support.”
Addition unaffected
The Country Smoke House had been in the process of an ongoing expansion process to accommodate the creation of a new USDA licensed meat packing facility.
Once completed, the addition is expected to facilitate the hiring of as many as 12-25 new employees.
Fortunately, that area of the building was not affected by the fire.
Successful history
The Country Smoke House began operations in 1988, and had been the recipient of numerous awards for the quality of its meat products.
The business has also become a popular destination for families traveling north- and southbound on M-53 on their way to and from Michigan’s Thumb region.
In addition to the Almont Township Fire Department, other departments responding to the scene included Imlay City, Goodland, Attica, Dryden and Mussey Township.