IMLAY CITY — The Imlay City boys’ soccer team sent visiting Richmond down to an 8-0 defeat in the finals of the Blue Water Area Conference Tournament last Wednesday afternoon.
With the outcome, Imlay City moves to 10-3-2 this season.
In Wednesday’s contest, Imlay City jumped out to a 3-0 advantage at halftime. 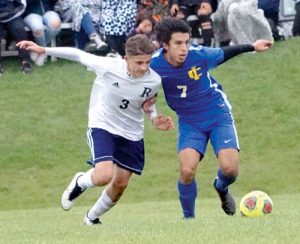 Omar Cardenas, of Imlay City, protects the ball from a Richmond foe in Wednesday’s match.

Imlay City then followed it up with a 5-0 second half edge, finishing off an 8-0 victory.
Omar Cardenas (unassisted), Arturo Gonzalez (set up by Luis Barragan), William Tolley (via a header), Emmanuel Lopez (set up by Sergio Galiana), Gonzalez (assisted by Galiana), Cesar Zepeda (via a penalty kick), Alejandro Mungia (set up by Gonzalez) and Lopez (assisted by Austin Torres) supplied Imlay City’s goals.
Braulio Torres went the distance in net for Imlay City. He was credited with four saves.