ALMONT — The Almont varsity football team finds themselves in the state playoffs again, securing that distinction with a 48-14 homecoming win at the expense of Blue Water Area Conference counterpart Armada last Friday night.
With the decision, Almont improves to 6-0 and 5-0. Armada falls to 2-4 and 1-4. 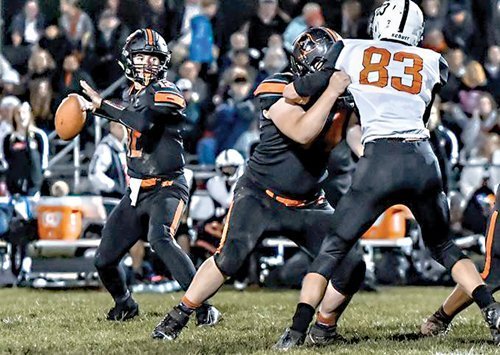 “It was nice to put on a good show for our homecoming crowd,” Almont Coach James Leusby said. “We appreciate all of the support we have been getting from the community and we are looking forward to having a nice crowd traveling to Richmond next Friday,” he noted.
“We were able to get everyone a lot of time on the field tonight and we came out of another week healthy.”
In Friday’s contest, Almont bolted out to a 22-0 advantage after one quarter was complete.
They then followed it up with a 19-7 second quarter edge, good for a 41-7 cushion at the halftime break.
The third quarter of play would prove scoreless.
Both sides added seven points to their totals during quarter four, leaving Almont up 48-14 at night’s end.
Almont amassed their 48-point output aided by a Mason Smith 48-yard touchdown run (followed by a successful extra point attempt by Brandon Hunsaker; a Josh Hellebuyck to Colby Schapman 38-yard touchdown pass (followed by a PAT tote by Jack Paupert); a Hellebuyck to Schapman 20-yard touchdown pass (followed by an accurate extra point boot from Hunsaker); a Paupert 28-yard touchdown run (followed a successful extra point kick Hunsaker); a Jacob Castillo 80-yard touchdown run; a Hellebuyck to Jackson Malcolm 27-yard touchdown pass; and a Charlie Koenig 58-yard touchdown run (followed by an accurate extra point boot from Hunsaker).
For the night, Hellebuyck completed seven of 13 pass plays for 108 yards as Almont’s quarterback. He threw zero interceptions along the way.
His successful tosses went to four different targets. Their ranks consisted of Schapman (three catches for 61 yards), Meric Okoniewski (two receptions for 10 yards), Malcolm (one catch for 27 yards) and Paupert (one reception for 10 yards).
The Almont ground attack wound up with 390 yards on 36 totes.
Individually, Castillo (eight rushes for 121 yards) and Paupert (101 yards on eight totes), Koenig (six rushes for 70 yards) and Smith (65 yards on four totes) led Almont. The remaining 10 Raider rushes netted a combined 43-yard gain.
Jacob Hausmann (two solos and five assists), Landon Kruse (three solos and two assists) and Corey Webster (five assists), supplied Almont’s highest tackle totals. Lucas DeLaurier (three solos and one assist), Nolan Panduren and Scott Pape (one solo and three assists each) plus Mike Rinke and and Lane Jackson (four assists apiece) made their presence felt as well.
The Almont defense also contributed one takeaway. Jackson (a fumble recovery) furnished that.
Almont returns to action this Friday when it travels to Richmond in a battle of unbeaten squads. That clash is slated to begin at 7 p.m.