Held on in final quarter for win 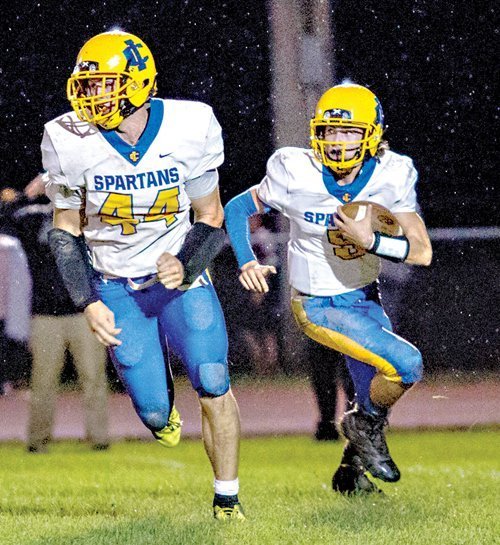 IMLAY CITY — Imlay City edged host Armada, 19-18, in a Blue Water Area Conference varsity football meeting last Friday night.
With the result, Imlay City improves to 3-2 and 2-2. Armada slips to 2-3 and 1-3.
“Armada played hard right down to the wire,” Imlay City Coach Brian Tresnak said. “We had a great week in practice,” he noted.
“All of the guys put in a lot of effort, especially on the offensive side of the ball. We just need to keep putting the work in and focus on getting better every play, every day. I’m proud of the way this team is coming together and really gutting it out for four quarters the last couple weeks.”
In Friday’s meeting, Imlay City and Armada ended the initial quarter with zero points apiece.
The middle two quarters saw both sides generate 12 total points.
Imlay City then outscored Armada 7-6 from that point on, prevailing 19-18.
The visiting side produced their winning 19-point total thanks to an Austin DeRocher 17-yard touchdown run; a Cristian Rojas 52-yard touchdown run; and a Riley Bertram 13-yard touchdown run (followed by a successful extra point kick courtesy of Wyatt Luther).
For the night, Bertram connected on four of eight pass plays for 121 yards as Imlay City’s quarterback. He threw one interception en route to those numbers.
His successful tosses went to three different targets. Their ranks consisted of Cristian Rojas (two catches for 78 yards), Chris Cezik (one reception for 29 yards) and Dakota Sandzik (one catch for 14 yards).
The Imlay City ground attack managed 297 yards on 45 totes.
Individually, DeRocher (17 rushes for 103 yards) and Bertram (92 yards on 11 totes) put up Imlay City’s best totals. Rojas (12 rushes for 85 yards) and Sandzik (17 yards on five totes) supported their performances.
Lance Wolford (six solos and 12 assists), Luther (four solos and 11 assists), Cristian Rojas (one solo and seven assist) and Austin Herrera (eight assists) paced Imlay City’s defense. Julian Rojas (three solos and four assists) and Xander Nolin (one solo and five assists) supported their performances.
Wolford added a fumble recovery to Imlay City’s cause.
Imlay City returns to action this Friday when it travels to Yale for a BWAC contest. That battle is slated to begin at 7 p.m.