Pennies, nickels, dimes add up to an education

IMLAY CITY — Pennies, nickels, dimes and quarters may have comparatively little value to adults.
But for 5- and 6-year-olds, even coins can add up to big dollars if saved and allowed to grow over time.
On Tuesday (Sept. 24), representatives from the Lapeer County Community Foundation (LCCF) and Lapeer Intermediate School District visited Weston Elementary School in Imlay City to introduce kindergarteners to the Foundation’s brand-new Lapeer County Education Attainment Fund (LEAF).
LCCF Director Nancy Boxey said the newly-implemented LEAF program is made available to Lapeer County’s youngest students through a partnership involving the Foundation,  ELGA Credit Union and the Lapeer County ISD.
Joining Boxey at the school were LCCF representative Jennifer Phillips and Dawn Mosher of the Lapeer County ISD.
Boxey told the more than 130 Weston students  that they are among hundreds of Lapeer County kindergarteners to be provided their own savings accounts; each containing $25 in seed money.
The children were then shown a video explaining the comparative value of U.S. coin denominations, before being presented with their very own “piggy bank” to take home. 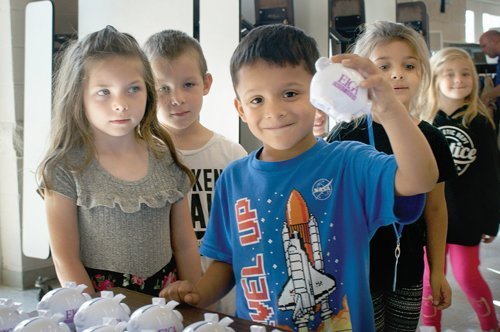 Imlay City kindergartener Carlos Garcia proudly holds up the piggy bank given to him on Tuesday by representatives from Lapeer County’s LEAF program. Each student also received a savings account with $25.

“Today is the start to your saving for your education,” Boxey told the children. “Now you can put your coins in your piggy banks and start saving.”
Deposit-only accounts
The LEAF accounts are for deposits-only and are designed to encourage children and their families to make continued contributions throughout the school years to maximize the account’s value.
Withdrawals from the accounts are restricted to post-secondary education expenses; such as for traditional college or university degrees, or various career training programs, including in the skilled trades.
The program is expected to serve between 800-1,000 Lapeer County kindergarteners in the first year, and potentially three times that number in year three.
Boxey said the LEAF program’s primary goal is to establish a simple and certain way for Lapeer County’s youngest residents to begin saving for post-high school education.
“We’re extremely excited about the impact this program will have on students in Lapeer County,” said Boxey. “LEAF is a major achievement for the foundation and it’s the largest program since the LCCF’s inception”
Boxey added that ELGA has agreed to provide additional financial support to allow the program to offer additional philanthropic incentives over the first three years.
“Parents and the community are encouraged to support the program,” she continued. “They can do so  by making contributions to the account, either through direct deposit or by making a contribution at any ELGA branch.”
For further information about the Lapeer County Community Foundation’s LEAF child savings program, call the LCCF office at 810-664-0691.