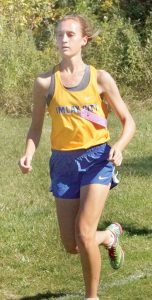 Imlay City’s Sydney Kapushinski picks up the pace during a recent meet.