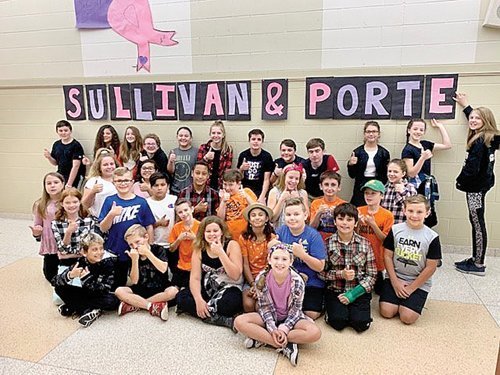 Almont Middle School students show support for teachers Jennifer Sullivan and Renee Porter, who are battling cancer but providing inspiration for the school’s annual ‘Fun Run’ fundraiser. A portion of this year’s donations will go to the American Cancer Society on behalf of the two teachers. A single letter (Porter’s ‘R’) is needed to meet $15,000 goal. Photo by Kelly Petrovich

ALMONT — Almont Middle School Principal Kim VonHiltmayer said school staff and students are working harder than ever to raise funds for the school’s 2019 “Fun Run” on Friday, Oct. 11.
VonHiltmayer pointed out that funds collected from the annual Fun Run typically go toward various “extras,” such as recess and gym equipment,  field trips and much-needed classroom materials.
She added that the middle school’s primary fundraiser usually generates between $8,000-$10,000.
This year, however, AMS students and staff have established a goal of raising $15,000; about 10% of which will be donated to the American Cancer Society.
Added incentive
VonHiltmayer said students and staff are “very motivated” to meet this year’s particularly lofty goal; most notably because of the school’s ongoing support for middle school teachers Jennifer Sullivan and Renee Porter, both
of whom are battling cancer.
“As a way to further motivate staff and students to get involved and donate to the Fun Run, we’re  wanting to raise as much money as possible this year to also benefit the American Cancer Society,” VonHiltmayer said.
She explained that for every $1,000 raised, a single letter from Mrs. Sullivan’s and Mrs. Porter’s last names is
posted in the school hallway.
Goal within reach
As of Tuesday (Oct. 1) morning, VonHiltmayer said middle school staff and students had raised $14,011; bringing their ultimate goal within close reach.
“We’re inching nearer to our goal,” she said. “As things stand we only have $988.75 before we reach our goal.
“When we are able to post all of the letters in both teachers[ names (Sullivan and Porter), we will know we have reached $15,000.”
VonHiltmayer said when individual letters are posted, AMS students are eligible to earn special rewards, to include (1) being allowed to read outside for 20 minutes; (2) extended recess periods; and (3) a special “Hat Day” at the school.
VonHiltmayer said the school’s teaching staff has already been rewarded with a “Jeans Day” for having achieved a 95% participation rate.
In response to the overwhelming support, VonHiltmayer expressed gratitude to all those who have donated “so generously” to this year’s Fun Run fundraiser.
“The support has just been phenomenal,” she said. “We want to say ‘thank you’ to our local businesses, to our community and everyone that has donated thus far,” said VonHiltmayer. “I want to make mention that our custodial agency, Axium Services, donated $1,800 to our fundraising effort. That’s amazing.”
VonHiltmayer reiterated the high level of enthusiasm shared by this year’s participants and donations.
“For all of us at this school, this is a very special and meaningful Fun Run,” she said. “We continue to extend our best wishes to Mrs. Sullivan and Mrs. Porter and are sending positive vibes that they stay strong,” said VonHiltmayer. “We want them to know how much we support and love them.”
Though the school’s initial intent was to donate about 10% of what is raised to the American Cancer Society, VonHiltmayer said that percentage could grow higher.
“Depending on if we meet our ($15,000) goal and how much is ultimately raised, I think the (ACS) donation could be higher than that.”