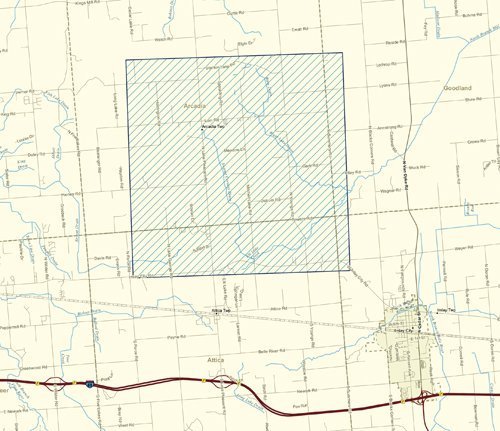 LAPEER COUNTY — Unfavorable weather conditions have postponed plans for an aerial pesticide application in Lapeer County so far this week.
In an effort to slow the further spread of Eastern Equine Encephalitis (EEE), an illness contracted by mosquito bites, state and local health officials want to treat an area encompassing a portion of Arcadia Township and small sections of northern Attica and western Goodland townships. The area surrounds a location in Lum where a horse contracted EEE earlier this month and died.
The application, along with others in 13 additional counties, was due to occur Sunday night but a low cloud ceiling prevented that, Lapeer County Health Department Director Kathy Haskins said.
“Spraying is being determined on a day to day basis, as weather, wind, temperature all come into play,” she said.
The product to be used, Merus 3.0, is considered an  organic pesticide that contains five percent pyrethrins. 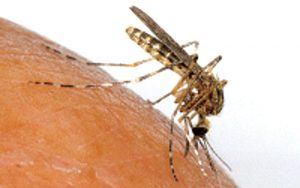 “Mosquito control professionals will apply approved pesticides as an ultra-low volume (ULV) spray. ULV sprayers dispense very fine aerosol droplets that stay suspended in the air and kill adult mosquitoes on contact,” the Michigan Department of Health and Human Services stated in a press release.
Haskins said that amounts to a twin-engine plane flying at about 300 feet above ground applying a very small amount of the product, approximately 1 tablespoon per acre.
As of Tuesday, Lapeer County was one of 15 counties where at least one animal case of EEE had been confirmed. Nine human cases of the disease have occurred elsewhere in the state, resulting in three fatalities.
State health officials said that residents won’t need to take any special precautions during an application. Anyone with known sensitivities to pyrethrins are being encouraged to stay indoors while the spray is applied.
“Aerial spraying will be conducted in the nighttime hours as this is when mosquitoes are more active. It is also when fish are less likely to be at the surface feeding and honeybees are most likely to be in their hives. However, owners should cover small ornamental fish ponds during the night of spraying,” state health officials said, referring to the post-dusk start time for application campaigns.
Haskins added that larger bodies of water, such as lakes, will not be sprayed over.
“We are participating in the spraying in order to help reduce these mosquito populations in our area to decrease the risk of individuals in our area contracting EEE,” she went on to say.
“EEE is one of the most severe mosquito-borne diseases in the U.S. About 33% of patients who develop EEE will die.  Many of those who survive have mild to severe brain damage.”
She said Lapeer County residents can find the most up-to-date information about EEE and any planned aerial applications online at www.michigan.gov/EEE, including treatment zone maps, frequently asked questions and other related information.
Property owners can request to opt out of the aerial applications by contacting state officials at eee@michigan.gov.
• • • • •
The EEE virus can cause inflammation of the brain (encephalitis). It takes 4 to 10 days after the bite of an infected mosquito to develop symptoms of EEE.
Severe cases of EEE infection begin with the sudden onset of headache, high fever, chills and vomiting. The illness may then progress into disorientation, seizures and coma.