IMLAY CITY — For those with fond memories of Detroit’s old Tiger Stadium, you will not want to miss award-winning author Doc Fletcher’s upcoming visit to Imlay City.
Fletcher, who penned ‘The History of Tiger Stadium: A Love Letter to Baseball at Michigan & Trumbull,’ among others, will be guest speaker at the Ruth Hughes Memorial Library on Monday, Sept. 30 at 6 p.m.
In 2017, the Michigan Library Association named Fletcher the winner of the Michigan Author Award.
Well-known for his six books about canoeing Michigan’s rivers, Fletcher’s heartfelt tribute to Tiger Stadium stands out as an enduring testimonial for generations of Detroit Tiger fans who sat in the stands at “The Corner,” cheering on the home team.
Fletcher says his love affair with Tiger Stadium dates back to July 8, 1965, when at age 10, his father took him to his very first baseball game.
Though his father preferred football and viewed baseball as being “boring” and just “two guys playing catch,” Fletcher found the game and the ballpark uniquely appealing.
“My first impressions of the ballyard differed little from many Tiger fans,” Fletcher recalls. “The grass a shade of green the most beautiful color I’d ever seen; and the aroma a delightful blend of hot dogs, spilt beer, roasted peanuts and cigar smoke.”
Those initial visual and olfactory impressions evolved over the years with more frequent visits to the revered structure at the corner of Michigan and Trumbull streets in Detroit.
Fletcher alludes not only to the uniqueness of the structure itself, but to the stadium’s historical and cultural significance.
“The ballpark affectionately known as ‘The Corner’ was located at the oldest address in American professional sports—2121 Trumbull Avenue,” says Fletcher, who points out that the location previously housed a wooden structure known as Bennett Park.
When (Bennett Park) was torn down in the winter of 1911-1912, Fletcher says the wooden structure was replaced by Navin Field, “one of the first steel and concrete stadiums to be built in America.” 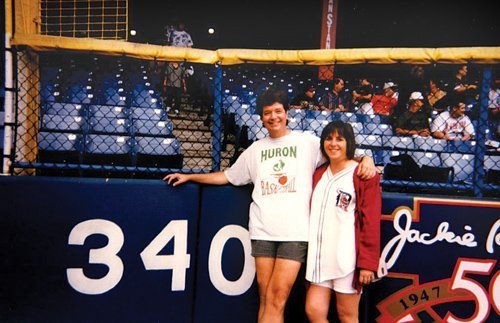 Back in the day, Doc Fletcher and wife, Maggie, pose against the 340′ sign in left field; a familiar site to generations of Detroit Tiger fans who viewed ‘The Corner’ as a sacred site within the City of Detroit.

A second deck was added to the park in 1923 and by opening day in 1938, the stadium’s name had been changed to Briggs Stadium, in honor of then-team owner, Walter O. Briggs.
It wasn’t until 1961 that the stadium’s name was changed again; this time to “Tiger Stadium.”
Fletcher marvels at the now-demolished ballpark’s dimensions; particularly the outfield depths of just 325 feet from home plate down the rightfield line; 340 feet in left field; and 440 feet to dead center.
He says that in order to squeeze in the desired number of right-field upper deck seats Walter Briggs wanted during an expansion, a 315-foot ‘overhang’ was created in right field.
“Many an outfielder stood near the wall waiting to catch a long flyball, only to have it catch the overhang—turning a would-be out into a home run.”
After that first game at Tiger Stadium back in 1965, Fletcher had multiple opportunities to see a potpourri of Major League baseball stars at The Corner, along with a few Detroit Tiger players he considers his all-time favorites.
Mark Fidrych, AKA “The Bird,” immediately came to mind for Fletcher.
“It still chokes me up whenever I think of him,” he says. “He was the most genuine, honest, quirky and lovable Tiger. The Bird is still the word, and always will be for me.”
Fletcher, however, bestows his ‘favorite player’ designation to Norm Cash, the Tiger’s talented first baseman of the sixties.
“Despite my deep affection for the Bird, ‘Stormin’ Norman’ Cash is my favorite Tiger of all-time,” says Fletcher. “I was one of thousands of kids across Michigan that wore his number ‘25’ on my Little League and softball jerseys.
“Norm had more crack-you-up one liners than home runs, and he had 377 homers when he retired from the game after 1974.
“Of course, I also love Al Kaline,” he says. “Number 6 was wonderful and we are blessed to still have his continued presence around the team.”
Another of Fletcher’s Tiger favorites is Frank Lary, nicknamed the ‘Yankee Killer’ for his dominance over the nearly unbeatable New York Yankee teams of the fifties and sixties.
“One of the most rewarding parts of writing this book was when I was able to hand-deliver a copy to Frank Lary’s widow, Mary Kathryn, this past May—the month the book was published.”
Fletcher says he is looking forward to coming to the Ruth Hughes Library in Imlay City, where he plans to share yet more stories and memories from “The Corner” with others.
“For those who love and miss Tiger Stadium, I encourage them to stop by the library at 6 p.m. on Monday, Sept. 30, to relive so many wonderful moments at the corner of Michigan and Trumbull.”
For further information about Doc Fletcher’s program, contact Diane Willick at the Ruth Hughes Memorial District Library at 810-724-8043; or email dwillick@ruthhughes.org.