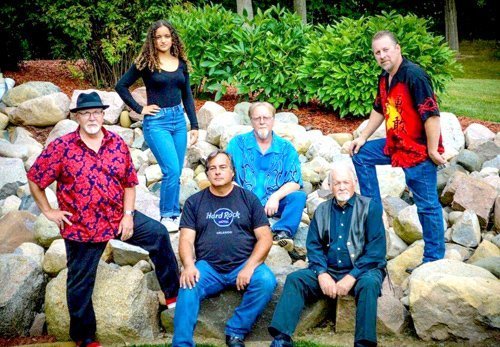 See and hear the Barncats on stage at the Dryden Fall Festival this Saturday night, starting at 8 p.m.

DRYDEN — One of Lapeer County’s most popular bands headlines the musical entertainment on Saturday night at the 2019 Dryden Fall Festival this Friday and Saturday, Sept. 27-28.
The “Barncats” play from 8 p.m. – midnight at the festival tent on Saturday, performing a veritable potpourri of classic rock and hits from the ’60s through ’90s.
Led by founding members Bob Clark, Steve Starling and Larry Kozloff, the newest version of the Barncats features Sarah Michele on vocals and keyboards; Cary Tochette on bass and vocals; and Brian Whitcomb on drums.
The complete festival entertainment schedule for 2019 features GT Sounds DJ on Friday, Sept. 27 from 4-7 p.m., followed by Joy Ride from 8 p.m. – midnight.
Saturday’s entertainment begins with Ground Zero from noon – 3 p.m.; followed by Dave Lagness from 4-7 p.m.; with the Barncats taking the stage at 8 p.m.
Saturday’s activities kick off at 9 a.m. with the 5-K run, followed at 11 a.m. by the 2019 Dryden Fall Festival Parade, featuring the Dryden High School band, Dryden Vets,  Scouts, floats and various marching groups.
This year’s Dryden Fall Festival Parade grand marshal will be police officer and firefighter Dave Hill.
Cars/Trucks/Cycles
Among Saturday’s highlights  will be the popular Car/Truck/Motorcyle Show from noon – 4 p.m.,  sponsored again by Masters Automotive.
Show entries are eligible for trophies, a 50/50 raffle, dash plaques, door prizes, goody bags and at least one-year ‘bragging rights’ for the winners. Antique tractors will also be on display.
BBQ and
fireworks
Something new this year is the festival’s first-ever “BBQ Competition” from noon – 8 p.m. on Friday, with judging to begin at 6 p.m. To register for the BBQ Competition, call 810-796-2291.
Of course, the traditional Dryden Fall Fest fireworks display at Cardinal Field is Saturday night, starting at dusk.
New stuff, too
“We’re offering some new attractions and activities this year,” says Mike Franz, co-event coordinator and owner of Masters Automotive. “On Saturday, we’ll have twice as many inflatable rides for the kids, a climbing wall, face painting, a clown and a video game trailer.”
Vendors, food options
If you’re looking for shopping bargains, a large and diverse group of crafters and vendors will be displaying and selling their items.
Franz encourages festival attendees to bring along their appetites; noting the wide range of cuisine available for purchase including barbecue, pizza, hot dogs, tacos, nachos, ice cream, elephant ears, funnel cakes and much more.
“We want to welcome everyone to come out and celebrate this event with our community,” says Franz. “There is going to be something here for everyone.”
For further information about the 2019 Dryden Fall Festival, visit the website at: www.drydenfallfestival.com