‘Art in the Rough’ to feature works of
local artists from 4-10 p.m. downtown

IMLAY CITY — The Imlay City Downtown Development Authority (DDA) and Lapeer Art Association are teaming up again to co-host “Art in the Rough” on Saturday, Sept. 28 in downtown Imlay City.
From 4-10 p.m., the works of dozens of talented Michigan artists and artisans will be on display for public viewing at various downtown locations.
Advance tickets for Art in the Rough are still available for $15 apiece at the Imlay City offices. Or they may be purchased for $20 on the day of the event.
DDA Director Lorrelei Natke said the event begins with a VIP reception from 4-6 p.m. at the former Hiram’s Tavern location at the southwest corner of Main and Third streets.
VIP tickets are $50 per person, with guests being treated to beverages and snacks while listening to the Jim Bach Trio.
At 6 p.m., the live music moves outdoors, where the Davis-Green acoustic duo performs, featuring Wendy Davis on vocals and husband, Matt Davis, on guitar.
All attendees are invited to visit designated downtown business locations to view or purchase the works of up to 40 featured artists. 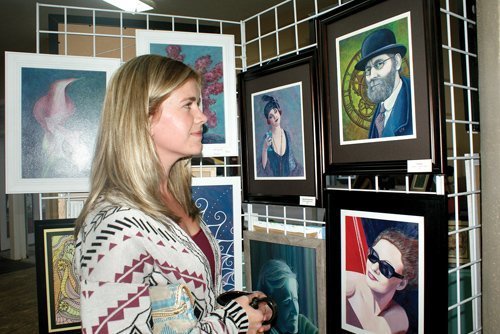 Guests can view and purchase creations from Michigan artists this Saturday in downtown Imlay City.

All participants may partake in the craft beer and wine tastings at the outdoor bar, constructed by Outdoor Creations.
Pat Smillie Band
By popular demand, the Pat Smillie Band returns to the main stage downtown from 8-10 p.m., playing Detroit-style blues, R&B and soul music.
Born in Detroit, Smillie’s earliest musical influences included Wilson Pickett, Bob Seger, Mitch Ryder, The Temptations and other Motown artists.
In 1992, he moved to Chicago, where his hard-edged blues and R&B vocal stylings were perfectly suited for Chi-town’s legendary Checkerboard Lounge and other top establishments.
In 2015, Smillie returned to Detroit to front his own band; performing with Detroit guitarist Jim McCarty of Mitch Ryder & Detroit Wheels fame.
Smillie currently performs twice a month with legendary Motown guitarist Dennis Coffey at Detroit’s popular Northern Lights Lounge.
This year, he was nominated for a 2019 Detroit Music Award in the category of “Outstanding Blues Vocalist.”
Smillie’s current band includes himself on vocals; and features Josh Ford on bass guitar; John Rhoades on guitar; and Todd Glass on drums.
For more information about Art in the Rough, contact Lorrelei Natke at 810-724-2135. Or visit the Imlay City DDA website at: www.icdda.com