LAPEER — Investigators are still trying to determine the events that led up to the Sept. 8 incident in Dryden Township that left one man shot and injured and second killed by gunfire; but as of Wednesday, they knew enough details to formally charge the man they believed responsible. 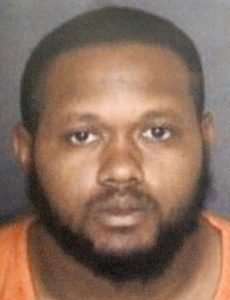 Lydell Dukes, a 37-year-old Ferndale resident, was charged with open murder in the shooting death of Jason Stefanski and faces one count of assault with intent to murder for shooting and injuring Nicholas Palazzolo.   Stefanski’s body was discovered in a Hollow Corners Road ditch in the early morning hours by police who responded to the area for reports of gun shots.

At a joint press conference held Wednesday, Sept. 11, Lapeer County Sheriff Scott McKenna, Dryden Township Police Chief Shawn Peters and Lapeer County Prosecutor Mike Sharkey provided details in the investigation, including how they apprehended the suspect and listed the multiple charges leveled against Dukes.
“It’s still very early in the investigation. There are a lot of pieces to this puzzle,” McKenna said, adding that based on evidence located in the vehicle, it’s believed the shootings were drug-related.
As of Monday, Peters said there wasn’t any new information regarding the investigation
Stefanski, 35, was a resident of Rockford with family ties to the Almont area and Palazzolo, 29 is a resident of Cadillac. McKenna confirmed that an autopsy was performed last Monday and determined Stefanski died from his wounds, having been shot twice. Police said that Palazzolo was being cooperative with detectives.
Taking Dukes into custody proved to be a harrowing task for deputies, McKenna said. Deputy Jesse Rhodes located Dukes’ vehicle on Sutton Road, having followed a groove in the road from Hollow Corners Rd. that indicated someone may have left the area with a flat tire. Rhodes approached the vehicle and called for backup when he saw a handgun in the suspect’s lap. Dukes ignored orders from responding officers to turn his vehicle off and proceeded to drive away. The suspect was northbound on M-24, driving only on the wheels’ rims, when he collided with two sheriff cruisers north of Lapeer and was taken into custody. McKenna said speeds only topped out at 40 miles per hour but said Dukes was driving erratically.
Sharkey said that Dukes had also been charged with fleeing and eluding, resisting an officer and multiple weapons charges.
McKenna credits the Hollow Corners Road residents for calling 911 to report the gunshots when they did.
“The original caller, because of their actions…they are probably the reason we have all of these people in custody,” he said.
Peters praised the cooperation between agencies for bringing the investigation to this point.
“Everyone here in Lapeer County does an outstanding job of coming together. I’m confident that as we go forward we’ll get to the bottom of this,” he said.
The chief said August 2012 was the last time Dryden Township had a homicide. Investigators classified that incident as a murder-suicide.
“I think it opens your mind and eyes to the point that in this day and age these things can happen anywhere,” McKenna told reporters.
“That being said, we are very comfortable knowing Dryden is safe.”Dukes was denied bond at his arraignment Wednesday morning in Lapeer County District Court and remains in custody at the Lapeer County Jail. According to Sharkey, he’s due back in court on September 19.