LAPEER — Former State Rep. Todd Courser won’t log any jail time for a misdemeanor charge related to a 2015 sex scandal. On Monday, Judge Nick Holowka ordered Courser to serve 12 months probation after he entered a “no contest” plea to one count of  willful neglect of duty by a public officer.
The sentencing ends a years-long saga involving Courser and fellow freshman legislator Cindy Gamrat who were caught up in a sex scandal in 2015. After the hearing Courser spoke to reporters, continuing to claim his innocence and alleging the case only came to its closure because the Attorney General’s office wanted to “save face.”
“God has obviously done a mighty work and I’m very thankful for it. It’s been a long four years,” Courser said. 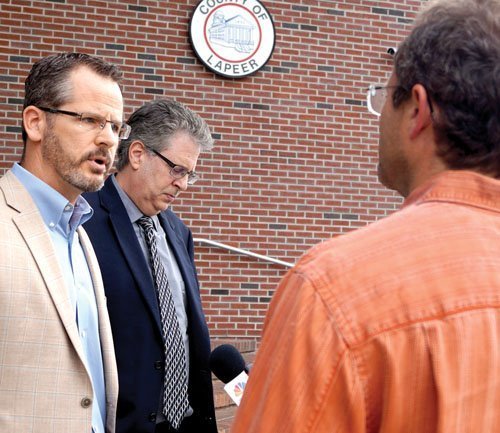 Todd Courser and his attorney Matthew DiPerno talk to reporters outside the Lapeer County courthouse after Courser was sentenced to 12 months probation on one count of willful neglect of duty.

He claims the Attorney General’s office couldn’t proceed with their case because “witnesses were changing their stories.” Courser again alleged that an audio recording exposing his attempts to hide an extra-marital affair with the help of Lansing staff was fabricated by the Detroit News.
In late August, just before the case was due to go to trial on one count of misconduct in office, Courser agreed to plea to the lesser charge.
The Republican represented Lapeer County’s 82nd District in the Michigan House for just nine months in 2015. That September, he resigned after being accused of attempting to use taxpayer dollars to cover up his extramarital affair with fellow Republican house member Cindy Gamrat.
In a statement, Attorney General Dana Nessel reiterated that Courser was “wise to accept his sentence today and acknowledge responsibility for his actions” but Courser claims he admitted no wrong.
“They wanted out of this obviously and were willing to do this for a misdemeanor,” he said referring to Nessel’s office.
“You then have to look at your family and the wear and tear on everyone. It was just time to turn the page.”
The sentencing almost didn’t happen. When Courser and his attorney Matthew DiPerno were called before Holowka, Courser stated that he was withdrawing his plea “subject to Cobbs agreement,” causing both DiPerno and Holowka to be visibly frustrated. Courser said he didn’t want to proceed unless the presentence recommendation was followed.
When Holowka indicated “for the fifth time” that he planned to follow the recommendation from the probation department, Courser changed his mind, saying “I’m not withdrawing my plea.”
Holowka, before detailing the punishment, said that public officials like Courser are held to a higher standard when it comes to maintaining the public’s trust. Additionally, Holowka said those in public office must “avoid the appearance of impropriety” but felt the defendant “failed” in that regard.
“Today’s sentence closes a case that has had a long and torturous history and reinforces that public officials will not be permitted to wield their power to cause harm to our state or its residents,” Nessel said.
The terms of his probation include a 45 day jail sentence but he can perform 90 hours of community service in lieu of 15 of those days. The remaining 30 days of that sentence will be waived if he successfully completes probation. His court costs and fees totalled $1,125.
In 2016, Courser was originally charged with four felonies for allegedly lying to a special Select Committee of House members who were reviewing an investigation that uncovered misconduct and misuse of taxpayer resources by Courser and Gamrat. The two legislators shared an office and staff in Lansing.
The charges were issued in Ingham County and some were later dismissed. A judge determined that  Lapeer County was the proper venue for the remaining misconduct in office proceedings as they related to Courser allegedly soliciting a state employee to send out a false email. Audio files, recorded in Courser’s Lapeer law office, indicate that Courser asked one of his aides, Ben Graham, to send out a fake, salacious email alleging Courser had an encounter with a male prostitute in an attempt to cover up the extramarital affair between Courser and Gamrat.
One remaining count of perjury was dismissed in exchange for Courser’s no contest plea to the willful neglect of duty charge.