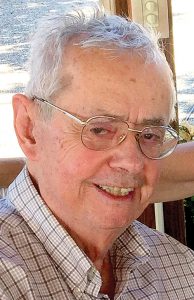 John Patrick “Pat” McCormick, 87, of Springfield, formerly of Michigan, passed away on Tuesday September 3, 2019 at Concordia Village. He was born on March 29, 1932 in Almont, MI to Harry and Sarah Miller McCormick. John married Shirley Swinson in Ann Arbor, MI on August 4, 1956 and she survives.
Mr. McCormick is survived by his children, Liisa (Fernando Gonzalez) McCormick of Brooklyn, N.Y., and Jon (Beth) McCormick of Springfield; and six grandchildren, Martin (Murphy Niu) McCormick, Andy and Thomas McCormick and Nadxielli, Antonio and Leon Gonzalez.
He was preceded in death by his sister Mary June Lambert.
Pat served in the Army Reserves for many years and he was a graduate of the University of Michigan with a Pharmacy Degree. He practiced as a pharmacist for over thirty years. Pat enjoyed classical music, coin and stamp collecting and he was an all around history enthusiast.
Cremation rites were accorded and a graveside service will take place at 10 a.m. on Saturday September 14, 2019 at Ferguson Cemetery in Almont, MI.
A memorial service will be held at 1:30 p.m. on Saturday September 21, 2019 at the Concordia Village Chapel.
Memorial contributions may be made to Nature Conservancy, 312-580-2100 or support.nature.org, and please visit the online “Life Remembered Story” at www.bischfuneralhomewest.com.