IMLAY CITY — So how would one evaluate the success of the 2019 Woods-N-News Outdoor Weekend on Sept. 6-8.
Perhaps the best way is to ask some people who were in attendance at the 33rd annual three-day event at the Eastern Michigan State Fairgrounds.
Most agreed the Outdoor Weekend was a perfect way to celebrate the arrival of autumn and another Michigan hunting season. The event is designed to appeal to people who hunt and fish, but the Woods-N-Water News show is also a time for individuals and families to learn about and share appreciation for the myriad activities and opportunities available to them in Michigan.
While some were attending the Outdoor Weekend for the very first time, most described the event as having become an autumn tradition for themselves and their families
Tony Bailey of Lapeer agreed with that assessment.
After passing through the gates on Saturday, Tony and his daughter Paige headed directly for the Puppy Tent, where a year ago they had picked out a Brittany puppy to take home.
Though they were not in the market for dog this year, Tony and Paige said they value the memories they share from having attended the Outdoor Weekend for more than two decades.
Likewise, members of the Dunn family of Lake Orion also stopped at the Puppy Tent to cuddle with some Golden Retriever pups. 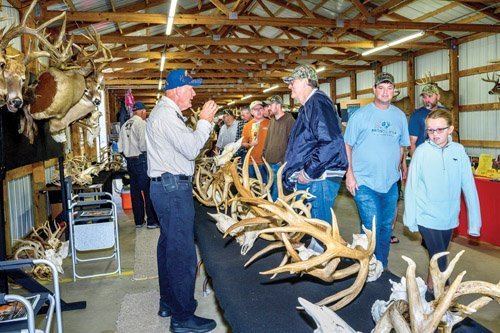 Visitors stroll through vendor barn and check out the antlers and mounts during Woods-N-Water News Outdoor Weekend on Saturday.

“They’re (retrievers) great family dogs,” said Cristy Dunn, though husband, Mike, was leaning toward a Brittany.
“I’ve been coming here since I was a little kid,” said Mike. “It was my dad’s birthday gift to me every year, and tomorrow I turn 33.”
While the Puppy Tent and Ultimate Air Dog competitions were big attractions for many families, the distinct aroma of chili drew those with a hankering to sample some spicy cuisine.
Back again for this year’s Camp Chili Cook-off was Lisa Niezur of Emmett, who was among the chili chefs competing for first prize in the Cook-off.
“I change my recipe a little bit every year,” said Lisa, “but I still keep it basic overall.  From what I’ve learned, it doesn’t work to go overboard with fancy ingredients.”
Also present for the Chili Cook-off were former contest winners Cary and Steve Brubaker of Midland, who proudly displayed the trophies they’ve racked up over the years.
“We had done this cook-off with my sister for years, but she passed away and we decided to take last year off,” said Cary. “This year we came back and we’re using her ‘special pot.’”
After sampling the various chili recipes, the judges selected the following chefs as this year’s Camp Chili Cook-off winners. They included Jerry Miller and Patrick Connelly, 1st place; Bill Burgess, 2nd place; and Shawn Setser, 3rd place.
On Sunday, Mike Schoenherr of Shelby Township and his dad, Eugene Schoenherr, arrived early to make the most of the day.
“We started coming here with my grandpa back in the late nineties,” said Mike. “This has become a tradition for us.”
Eugene said he’s noticed significant growth in the outdoor show since those early years.
“It must be three times bigger now than what it was when we first started coming,” said Eugene. “It’s more family-oriented now than back then. For me, being able to come here again brings back a lot of good memories.”
Over at Heritage Church’s Youth Archery Shoot, Jason Baker of Durand proudly watched as sons, Jaxen, 12, and Chase, 9, took turns shooting at the target.
“We’ve been coming three or four years now and it’s a lot of fun for all of us,” said Jason. “I won a gun at last year’s show. I think the kids most enjoy seeing the puppies.”
Also enjoying the show was Midland resident Missy Wolf, who was pulling around two-year-old son, Luke, in a wagon.
“We’d heard about the Woods-N-Water show but had never been here before,” Missy said. “I’m really glad we came. I like this event because I love Michigan and because I’m very supportive of entrepreneurism.
“I always like seeing the great, innovative things that people are doing in our state,” she said. “I’ve talked to a lot of people here  today and they are all very friendly. It’s obvious that everyone is having a great time.”
The more than 250 vendors assembled for the show also appeared to be enjoying the festivities.
Michelle Horsey, owner of Diva Outfitters, traveled all the way from Little Rock, Arkansas to display and sell her women’s camouflage clothing line at this year’s show.
“This is my third year coming to the Woods-N-Water show and I’ve enjoyed it every time,” said Horsey. “That’s why we keep coming back.”
Randy Jorgensen, the founder of Woods-N-Water News and annual Outdoor Weekend, credited the support and help from dozens of people for another successful event.
“It takes lots of hands and a lot of effort from a lot of people to make an event like this happen,” said Jorgensen. “From the people on the (Eastern Michigan) Fair Board, to our many volunteers and staff members, everybody chips in to make this show a success.
“We had great crowds throughout the weekend and heard lots of positive comments from people in attendance and our vendors,” Jorgensen continued. “We take a lot of pride in this show and it’s always satisfying to see so many people enjoying themselves over the weekend.
“We want to thank all those who helped put the show together,” said Jorgensen, “and special thanks to all the people and families that came out to enjoy the show.”
Note: Assistant Editor Maria Brown contributed to this story.