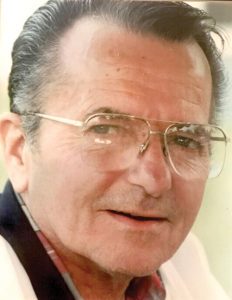 Gerard Sirois, Jr., 87, passed away Monday, September 9, 2019. Gerard Louis Sirois, Jr. was born August 22nd of 1932 in Detroit, MI. He grew up in Roseville, MI after the family moved into their new country home. Gerard had two sisters, Patricia Lorraine and Judy Nora. After graduating from high school, he joined the Navy, where he served as a Sonar operator on board the Destroyer USS McNair DD679. Gerard served in the Navy from 1951- 1953. For answering his call to duty, he was presented The Korean War Service Medal, European Occupation Medal, UN Medal of Honor, Presidential Sigma Wreath, Korean War Veteran, and two stars for the Battle of Ichon and the Battle of Wonsan. Gerard met and married Shirley Marter in 1955, the girl next door, and together they had seven children. One proceeds him in passing. He was a career mailman for the United States Postal Service. His route customers loved him. He bought a 120 acre farm in Imlay City, MI and said he was going to raise cattle. And so he did. With a lot of hard work and learning from his neighbors, he, together with his wife and children, worked a successful beef farm for many years. Gerard loved his farm and was proud of all he had accomplished in his life.
Gerard is survived by his wife, Shirley Sirois of Imlay City, MI; three daughters, Connie (Chris) Sirois of Imlay City, MI, Terry (Jimmy) Dodd of Capac, MI and Annette (Dave) Antisdel of Criston, IA; three sons, Arthur (Jonell) Sirois of Ashland, KS, Dan (JoAnn) Sirois of Flint, TX, and Louis Sirois of Fort Wayne, IN; his son-in-law, Terry DesRosier of Florida; his sister, Lorraine Schilling of Detroit, MI; 16 grandchildren; 25 great-grandchildren; one great-great-grandchild; and his special nephew, Frank Clark of Shelby Twp., MI.
He was preceded in death by his daughter, Michelle DesRosier; and his sister, Judith Kelly.
He was a lifetime University of Michigan fan. We pray he is at peace now, and free from the worldly pain and pressure of everyday living he carried with him, all these years. Perhaps when he passed, a young Gerard opened his eyes to find himself on the 10-yard line at the Big House in Ann Arbor, the play would read like this … the ball was caught by U of M’s number 22, Jerry Sirois. He starts his run towards the end zone … he’s at the 20, the 30, look at him go, the 40, the 50 … he’s going all the way, the 45, the 30, 20, 10, Touchdown!! Jerry Sirois has just made the play of the year! This young man is going places … and as the crowd roars and cheers for him, he looks up to see his daughter with open arms and her beautiful smile saying I’ll show you the way home Dad, it’s this way, towards the light … Rest in Peace Jerry.
Cremation has taken place. A memorial is not planned at this time.
Arrangements were made by Muir Brothers Funeral Home, 225 N. Main Street, Imlay City, MI. Please be sure to sign the online register at muirbrothersfh.com to share condolences and memories.