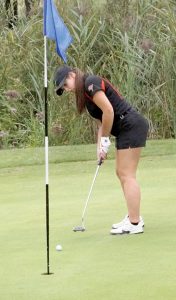 TRI-CITY AREA — Brandi Kautz posted a medalist round of 40 to lead Almont to a first-place finish Monday at a Blue Water Area Conference Jamboree Tournament.
Castle Creek Golf Course, in Lum, is where the action unfolded.
Almont’s winning total was 187. They were followed by Yale (197), Rochester Hills Lutheran Northwest (210), Armada (216) and Richmond (239).
Imlay City also participated but did not field a complete squad.
Hannah Revoldt (47) supplied Almont’s second best round. The Raiders also counted Jesse Hellebuyck’s 49 and Riley Wranonsky’s 51.
Abigail Fox led Imlay City with a 66.