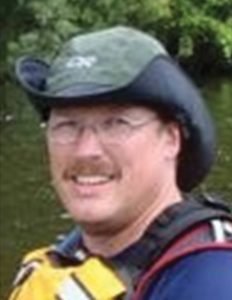 William “Bill” Gerard Dukus, 53, passed away unexpectedly at his home in Madison Heights on Friday, August 23, 2019. Bill was born on September 11, 1965, to William “Bill” and Donna (Mailloux) Dukus in Detroit, MI, where he lived until moving to Imlay City in 1971.
He was a 1983 graduate of Imlay City High School and attended the Lapeer County Vocational Technical Center. After high school, Bill proudly served in the United States Army from 1983-1987. After leaving the Army, Bill began a career as a systems engineer for Sprint Nextel, moving between Detroit, Chicago and Grand Rapids and finally back to metro Detroit, where he had resided since 1998. Bill was currently working for TelNet Worldwide in Troy, MI.
Bill was an avid outdoorsman, enjoying kayaking, biking, motorcycling, snowmobiling, cross-country road trips and the Detroit Tigers. In 2010, Bill embarked on a 13-day, 225-mile camping and kayaking expedition along the Grand River. In 2016, he paddled the four-day-long Looking Glass River Expedition with his good friend, Terry Groesbeck. He also took a two-week-long cross-country road trip along the famous Route 66 and visited Yellowstone National Park and the Smoky Mountains.
Bill was also an enthusiastic music lover, amassing an extensive music collection and attending concerts whenever possible.
Bill had many talents. For example, he was technically gifted and very hands-on, always knowing how things worked and being able to fix anything, including motors, engines and computers. He also readily shared those talents, serving as his family’s go-to electronics repairman. In fact, he was always willing to help anyone with anything.
He is survived by brother, Michael (Stephanie) Dukus of Lapeer, MI; sister, Julia (Jeremy) Knuckman of DeWitt, MI; nieces, Addison Dukus and Kate Knuckman; nephew, Jack Knuckman; and many special friends, including Terry Groesbeck and Pam Esper. He was preceded in death by his parents; and sister, Mary Ellen Dukus.
Services were held on Thursday, August 29, 2019, at Muir Brothers Funeral Home in Imlay City, MI. https://www.muirbrothersfh.com/