Two towns, one team, one win

TRI-CITY AREA — The Imlay City/Dryden co-op varsity football saw to it they would prevail, pulling out a 27-19 victory over visiting Vassar in a non-league game which started last Thursday and concluded Friday.
With the decision, the hosts improve to 1-0 overall. Vassar slips to 0-1 this season.
“It was big for us to come out and get a week one victory,’’ Imlay City/Dryden Coach Brian Tresnak said. “I thought we played well in stretches, but we were to susceptible to the big play defensively,” he noted. 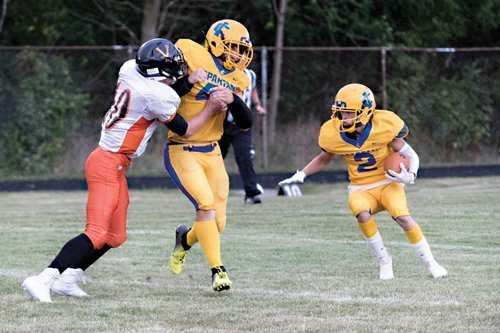 Dakota Sandzik utilizes a block during his squad’s season-opening game versus Vassar this past week. The contest, at Imlay City, saw the hosts prevail 27-19. Photo by Rod Soule

“We were happy with the way we were able to sustain drives offensively. When it mattered most in the fourth quarter we got the stop to end the game. We have to refocus quickly and work hard if we want to be successful.”
In the season-opener, the home team took a 7-0 advantage after one quarter was complete.
That was followed by an 8-6 second quarter edge, good for a 15-6 edge at the halftime break.
Quarter three would see both sides strike for six points when play was interrupted with 59.1 seconds remaining. The hosts were up 21-12 at the time.
The following day would see the Imlay City/Dryden come out strong. They added a touchdown just before the third quarter clock zeroed out, giving them a 27-12 cushion with 36 minutes gone.
Vassar then put together a 7-0 fourth quarter rally, only to drop a 27-19 verdict.
The Imlay City/Dryden co-op football team produced their 27-point total via a Riley Bertram to Dakota Sandzik 13-yard touchdown pass (followed by a successful Wyatt Luther extra point kick); a Bertram to Sandzik 14-yard touchdown pass; a Cristian Rojas nine-yard touchdown run; and a Bertram 13-yard touchdown run.
For the night, Bertram c five of 10 pass plays for 113 yards as the winning quarterback. He threw zero interceptions en route to those numbers.
His completions went to three different targets. Sandzik (three catches for 59 yards), plus Brenden Biggs and Rojas (one reception for 27 yards each) formed that group.
The Imlay City/Dryden ground attack wound up with 298 yards on 44 totes.
Individually, Rojas (10 rushes for 132 yards) and Sandzik (58 yards on eight totes) led the way. They were backed by Biggs (five rushes for 48 yards), Austin DeRocher (43 yards on eight totes), Bertram (eight rushes for 22 yards) and Lance Wolford (five yards on two totes). The remaining three Spartan rushes netted a combined 10-yard gain.
Rosario Milana (six solos and three assists), Wolford (five solos and two assists) plus Julian Rojas and Luther (four solos and two assists each) supplied the team’s top tackle outputs. Chris Cezik (three solos and an assist) also made his presence felt.
The winning Imlay City/Dryden side also notched one takeaway Sandzik (an interception) furnished that.
The Imlay City/Dryden co-op football team will look to keep their perfect record intact this Friday when it travels to Almont for a Blue Water Area Conference clash. That battle is slated to get underway at 7 p.m.