Imlay grad, colleagues give back

IMLAY CITY — A group of community-minded real estate agents last week made things a little easier for the Imlay City school district and the students who attend classes there.
Realty Executives Main Street Lapeer broker/owner Ray Megie, Associate Broker Chantel Fick and buyer/seller agent Doug Ferrell pooled their resources to pay off the $3,696.00 lunch debt that the district was carrying.
Megie, who has been a licensed Realtor for more than 23 years, says he’s a big believer in giving back to the community that has helped him succeed in business.
“When he heard about the need of Imlay City Schools he did not hesitate to partner with Chantel and Doug to take care of it,” says office assistant Karla Irwin.
Choosing to help Imlay City was easy, as Fick graduated from the district in 2008. She felt a debt of gratitude to Imlay City Schools, for contributing to her success later in life. Because Imlay City is Fick’s hometown, she was eager to partner for the lunch debt payoff.
Buyer/seller agent Doug Ferrell has been a licensed Realtor for the past 13 years. Like Megie and Fick, Ferrell is a community-minded person who likes to make a difference, especially for young people.
“He was happy to help pay the lunch debt because it was not only good for the schools, but more importantly it would positively impact the kids,” Irwin says.
Schools Supt. Dr. Stu Cameron says Realty Executives Main Street Lapeer’s generosity was a welcome surprise.
“When Chantel, Doug and Raymond reached out to us I wasn’t sure if they understood that the outstanding lunch debts in a school district our size can run into the thousands of dollars, as was the case here,” he says. “When I communicated that to them, I told them that I was sure that our students and their families would be appreciative of even a token effort. I let them know that no one would reasonably expect them to shoulder the kind of payment that would cover the total amount of the outstanding lunch debt. They didn’t hesitate for even a second.”
Cameron says Fick thought it was especially important to pay off the debt at the beginning of the school year, to reduce stress for students and their families, as well as the school district, at what is already a very busy, stressful time. 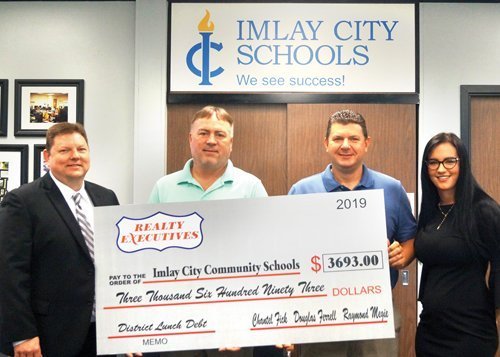 “This is truly a significant gesture. It is helpful to our students and their families, and really does help them enter the year with a fresh start,” Cameron says. “The fact that it comes from one of my former students (Chantel Fick) and her colleagues makes it all the more special. It is great to see a Spartan giving back.”
After graduating from Imlay City High School, Fick went on to he went on to obtain a Bachelor’s Degree in Legal  Studies and managed a real estate law firm in Oakland County.
Her colleagues say Fick’s knowledge of contracts and ability to handle each transaction with expertise and knowledge is among her many assets.
She is currently rated amongst the top agents in Lapeer County with more than 80 sales in the past 12 months.
Along with his 13 years of experience, Ferrell has been voted “Best of the Best” Realtor in Lapeer County for eight consecutive years.
Megie has completed more than 4,000 sales throughout his career.
Collectively, Megie, Fick and Ferrell have tallied more than $40,000,000 in transactions combined over the past 12 months.
Realty Executives Main Street Lapeer is located at 1022 S. Lapeer Road. For more information call 810-667-1700.