Board for its very tough decisions

ALMONT — For the past two years, the Almont Board of Education has been cutting staff and programs  and tweaking operations to recover from a dangerously low fund balance.
While the cuts have been painful and unpopular among many, Schools Supt. Dr. William Kalmar believes they have been necessary to ensure a more secure financial future for the district.
Kalmar notes that in November of 2016, Almont Schools’ fund balance was below 5%, which signaled a potential danger point  based on standards established by the state’s Office of School Review and Fiscal Accountability.
Like most Michigan school districts, Almont Community Schools has experienced a reduction in student population due to lower birthrates and the exodus of Michigan residents after the 2008 economic downturn.
In an effort to grow the fund balance and reestablish financial stability, Kalmar said the school board evaluated and adopted a strategic plan to save the district money, while still meeting the needs of students. The first step in the process resulted in layoffs of two teachers and a counselor, personnel changes to improve efficiencies—a $287,000 savings—and outsourcing the school district’s busing program, which is expected to save the district $500,000 over five years. 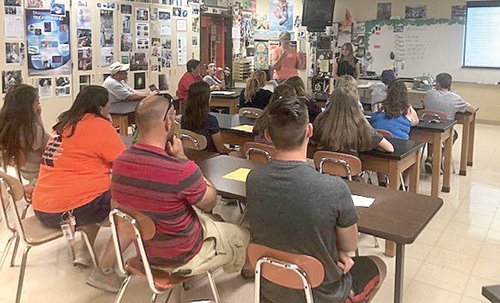 Almont High School welcomes incoming freshmen during orientation last week. The school district has made a number of budget cuts to recover from a dangerously low fund balance.

More recently, Kalmar said, the school board adopted additional changes to reduce costs; including laying off the elementary and middle school guidance counselor, reducing media center aides to 5.5 hours per day, reducing door-to-door busing, cutting French as a language option, eliminating 8th grade art, and adopting recess changes at Orchard Primary.
“As the superintendent, I have to make very difficult decisions which, in some cases, are taking away services that our community members like,” Kalmar says. “Ultimately, these sacrifices will help insure that this vibrant and high-achieving district not only survives, but thrives in the future.”
For their part in the process, Kalmar credits Almont School Board members for doing what they believe is in the best long-term interest of the district and students.
“I applaud our Board for refusing to kick the can down the road,” says Kalmar. “They have sat through four months of difficult meetings and have endured insults and mis-characterizations through social media. They did it because they care too much about our schools and our students to ignore these issues.”
He also thanked the district’s “booster” organizations for stepping up and helping to provide services the school district would not otherwise be able to do on its own.
“The boosters converted a barn into a concession stand and expanded the bathroom at our stadium,” he says. “I also want to thank again our residents for supporting our sinking fund, which allows us to pay for needed repairs and infrastructure replacement.
“By state and national measurements, Almont students receive an outstanding education,” Kalmar says. “We believe that happens due to our teachers.”
Reason for optimism
Kalmar says there may be some good news on the horizon.
“As of now, our enrollment numbers are better than our projections,” says Kalmar. “Hopefully, this means we can reverse some of our cuts.
“Still,” he says, “every day the State refuses to settle the school aid budget, it delays our ability to make responsible decisions on behalf of our community.
“If our leaders in Lansing had the guts these local school board members have demonstrated, we would have had a budget two months ago.”