TRI-CITY AREA — The start of another high school football campaign is quickly closing in. It is now just a day away.
Here is a look at our Tri-City gridiron squads, who they lost to graduation, their top returnees and their outlook heading in to Thursday’s season openers (all of which are slated to get underway at 7 p.m).
At Almont, James Leusby returns for his fifth year as the Raiders’ head coach.
Last season Almont amassed a 10-1 overall mark. That included 7-0 Blue Water Area Conference showing, good enough for first place.
Almont landed a spot in the Division 5 state playoffs once again, going 1-1.
They began their postseason run with a convincing 36-14 homefield victory over Birch Run. 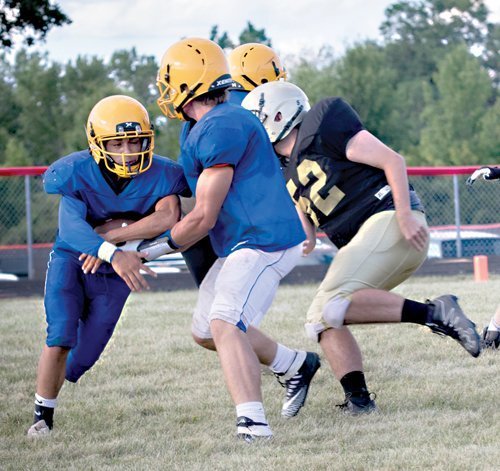 Imlay City quarterback Lance Wolford hands off to Cristian Rojas in a scrimmage versus Corunna this past week. Photo by Rod Soule

The following week Almont wound up six points short when the final scores were added up, dropping a 28-22 verdict to Frankenmuth at home.
Leusby counts 16 returning lettermen on this year’s roster of 41 players.
Jace Rinke (runningback/linebacker), Colton Kruse (linebacker), Connor Arms (tackle), Nick Wilson (guard) and Christian Buckmiller (defensive tackle) were Almont’s key losses due to graduation.
Josh Hellebuyck (quarterback), Jack Paupert (runningback/secondary), Colby Schapman (split end), Jacob Hausmann (guard/linebacker), Nathan Kerby (tackle/tight end), Derek Johnston (lineman), Mason Smith (runningback), Michael Lulgjuraj (runningback), Jackson Malcolm (tight end), Meric Okoniewski (tight end, defensive line), Nolan Panduren (defensive line), Michael Rinke (defensive line), Blake Kapron (linebacker) and Caleb Weigand (secondary) are Almont’s top returnees.
Leusby lists his team’s determination, coachability and hard work ethic as traits that should bode well for them as the start of another season approaches.
“We will need to use our speed and our players will need to play with great technique,” Leusby stated. “If we can do that we should be able to compete,” he noted.
“The BWAC is always a tough league to win when it comes to football. We are hoping to once again find ourselves amongst one of the top teams in the league.”
Almont kicks off the 2019 campaign this Thursday when it entertains non-league foe New Haven. That contest begins at 7 p.m.
Two schools, Imlay City and Dryden, with one common goal (success) in mind will join forces
That is the rallying cry as the Imlay City-Dryden co-op football team prepares for their first season together.
They will be guided in that pursuit by last year’s Imlay City varsity coach Brian Tresnak and last year’s Dryden varsity coach Allen Hutchinson.
The two are certainly no strangers to each other. which should bode well for them in their current pursuits. Tresnak previously served as a head coach at Dryden, with Hutchinson helping him out as an assistant.
The co-op team will be looking to improve on Imlay City’s 1-8 showing during the 2019 campaign. That featured a 0-7 Blue Water Area Conference mark, paving the way to an eighth.
The team will aim to add more wins this time around with a combined 19 athletes returning from last year’s squads.
Kyle Kulin (halfback/linebacker), Hunter Mullins (fullback/defensive end), Brandon Shafer (guard/defensive tackle), Lonnie Wolford (quarterback/cornerback), Jesse Prososki (offensive lineman/defensive lineman), Chris Watson (offensive lineman and defensive lineman), Andy Hintz (offensive lineman) and Wesley Hampton (runningback/defensive lineman) were the squad’s key graduation losses.
Lance Wolford (linebacker), Brenden Biggs (runningback), Cristian Rojas (halfback/linebacker), Mitchell Gill (halfback/defensive back), Cam Shirling (tight end/cornerback), Austin DeRocher (who previously saw action as an offensive lineman and now will play in the backfield), Colby Neighbors (cornerback), Jacob Vallad (offensive line and defensive line) and Andrew Alden (offensive lineman/defensive lineman) are the team’s top returnees.
Two-way lineman Joe Harper also should prove a key cog to the squad’s success. He is back after a one-year absence due to injury.
Tresnak describes this year’s squad as scrappy, hungry and competitive.
“I expect us to be much more competitive this year, Tresnak said. “We have had a full year with the offensive and defensive systems,” he noted.
“Our numbers are up and we have been building a culture of competitiveness for starting spots within the program. We still have lots of work to do, but we are making progress.”
The team starts the 2019 season this Thursday with a home game versus Vassar. That matchup lists a 7 p.m. starting time.
At Capac, Rob Novy starts his first year as head coach.
He takes over the sideline assignment from Bill Nestle, who stepped down at the completion of last season.
Last fall Capac put together a 2-7 overall mark. That included a 2-5 mark as far as Greater Thumb Conference East Division clashes were concerned, paving the way to a sixth.
Novy will determine his starting personnel from a roster of 22 players.
Jaykob Sawyers (runningback), Jordan Hellmuth (halfback, defensive back), Trevor Boers (end), Brad Schaefer (end/linebacker), Lonnie Fritz (linebacker) and Ian Kalmus (runningback), were mentioned as Capac’s key graduation losses.
Jordan Cherry (linebacker) is listed as one of Capac’s key returning players.
Novy said it is still too early to determine where his team may stack up as far as the battle for the Greater Thumb Conference title is concerned.
He listed Harbor Beach, Sandusky and Ubly as the teams that would most likely be favored to win the league title.
“Our objective is to come with everything we have each week,” Novy said. “This is our goal,” he noted.
Capac opens the 2019 campaign this Thursday with a road trip to Durand. That matchup lists a 7 p.m. starting time.