IMLAY CITY — Local children are jumping for joy!
Imlay City business owners Anthony and Ina Gavrilovski announced this week that “JUMP City” is officially up and running at the Belle Valley Plaza.
Over the weekend, the Gavrilovskis hosted what they described as a ‘soft opening’ to test out and tweak the facility’s operations.
The brand-new “family fun center” features multiple bounce houses, obstacle courses, slides, arcades and concession items.
Since mid-June, the couple had been renovating  the inside of the 8,700-square-foot building, which previously housed Nick’s Warehouse.
When the former tenants moved out, Anthony and Ina saw an opportunity to fill what they believe has been a void in the Imlay City community—a location dedicated to children’s activities.
In addition to the bounce houses, JUMP City offers separate rooms for private parties, along with a parent’s lounge equipped with wi-fi access.
Concession items are available for purchase by guests, including soft drinks, chips and snacks. 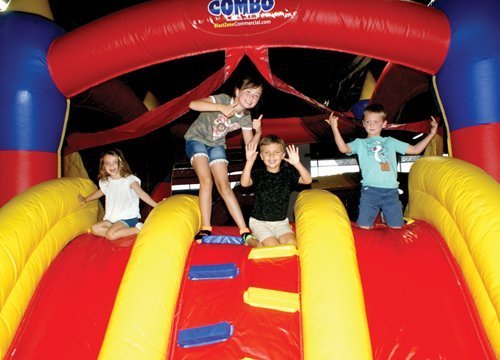 Youngsters pose atop one of several bounce houses available at JUMP City in Imlay City, which has officially opened to the public. The facility offers arcades, obstacle courses, concessions and an area for parties.

Safe fun for the kids
Ina pointed out that the safety of children is and always will be of highest priority at JUMP City.
“We want this to be a safe place where kids can come, play and have a lot of fun,” said Ina. “Children must be accompanied by a parent or under adult supervision. We’re all about the kids’ fun and safety.”
She pointed that that guests enter the building through a vestibule area, before gaining access to the children’s play areas.
Anthony said JUMP City offers daily “jump passes,” along with a special membership program for frequent guests of the facility.
“We want to welcome everybody to stop in, bring the kids, and have some great family fun right here in Imlay City,” said Ina. “And invite your friends and their kids to stop by, too.
“Our goal is for JUMP City to become a popular destination point for local families and kids.”
JUMP City is now open seven days a week from 10 a.m. – 8 p.m.
Parties may be booked online by visiting the website at jumpcityplay.com