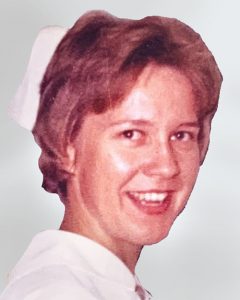 Donna Emilie Anderson, a woman of faith, phenomenal wife, mother and grandmother and whose talents as a musician and a nurse helped many people over the years, died on August 21, 2019; she was 79.
Donna was born to Finnish parents Heimo and Gertrude Moilanen on March 21, 1940 in Hancock, MI. Donna grew up and graduated from Baraga High School. She majored in music at Northern Michigan University where she met another bright, young musician named Ted whom she would call her husband for the next 42 years. Donna went on to attend nursing school at the Henry Ford College graduating as a Registered Nurse.
While living in Almont and raising their two children David and Laura, Donna worked at Crittenton Hospital in Rochester as well as Almont Community Hospital. After Ted’s retirement, they moved to the Elk Rapids area where Donna finished her career as a home healthcare nurse at Northwest Health in Bellaire. Donna’s years of nursing and caregiving culminated in the care of her last patient as she managed the healthcare of her beloved Ted by caring for him at home after years of illness, performing his dialysis before he passed in 2004.
Donna and Ted often worked as a team in creating and directing community choirs. Her music could be heard accompanying the Community Choir of Imlay City and gracing weddings, funerals, graduations, church services and any other occasion requiring her skills as pianist and organist. In retirement, Donna and Ted continued to use their musical gifts for 20-plus years as members at Calvary Lutheran Church in Elk Rapids. She volunteered herself, gave of herself and is remembered by her children as being “as sweet as they come.”
Donna will be fondly remembered and dearly missed by her children, Dave (Valentina) Anderson, Laura (Steve) Kornsey; her grandchildren, Alyssa (Joshua) Lein, Cameron and Carter Kornsey, Spencer and Sawyer Anderson; and her brother, Bill (Debby) Moilanen.
Friends and family may visit on Friday, August 30 at St. Paul’s Episcopal Church in Elk Rapids beginning at 1 p.m. Funeral services will begin at 2 p.m. with Pastor Zachary Nelson officiating, followed by a Committal service at Maple Grove Cemetery and a reception at A-Ga-Ming Golf Resort.
Memorial contributions may be sent to the Elk Rapids Band Boosters, Elk Rapids High School, 308 Meguzee Pt., Elk Rapids, MI 49629
Arrangements are entrusted to Covell Funeral Home, Elk Rapids.