IMLAY CITY — If you find yourself strolling down Third Street in Imlay City with no particular destination and a little time on your hands—make a point of checking out one of the city’s best-kept secrets.
Still interested?
Continue walking west on Third Street, cross Almont Avenue by the Pizza Machine, and you will soon encounter Imlay City’s “Butterfly Garden.”
The Butterfly Garden’s  picturesque setting is situated on what is now city property, where an old and blighted house once stood.
The concept for a butterfly garden was proposed by former Parks and Rec Chairperson Kelly Villanueva, whose hope was to establish a Monarch butterfly habitat. 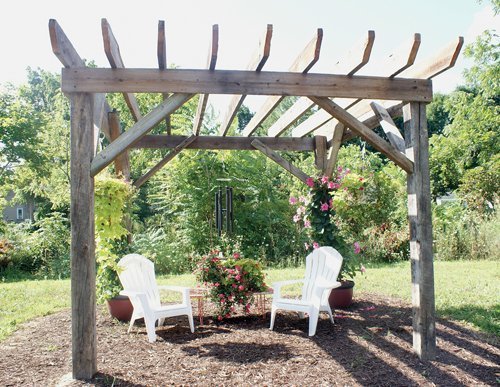 In 2016, the city was able to purchase the property and demolish the dilapidated structure through a joint collaboration involving Imlay City’s Parks & Recreation Board and the Imlay City Commission.
In 2018, a sign identifying the site as the Butterfly Garden was installed at the park.
The Butterfly Garden’s well-kept flower gardens and grounds are maintained by a dedicated group of volunteers, that includes Kelly Villanueva, Dr. Jim Sillers and Kay Youatt, the wife of Imlay City Manager Tom Youatt.
“Jim, Kay and I take turns watering the butterfly garden,” said Villanueva. “There are now more than 400 plants and flowers in there and all of them have been donated.
“Jim Sillers and the Youatts have been very supportive of the butterfly garden,” she said, “and it’s much appreciated.”
While acknowledging the community support of the project, Villanueva noted that members of Imlay City High School’s Robotics team had planted annuals at the site in the spring.
“They did a really nice job and we appreciate their help,” she said.
She added that even office staff at the Imlay City Hall have joined in efforts to help fulfill her dream of developing and maintaining a presence of Monarch butterflies at the garden.
“The girls at the city office take turns feeding milkweed to our Monarch caterpillars,” said Villanueva. “This truly is a huge collaboration of nice people offering their help and support.”
A new addition
This year, the city purchased and installed a Pergola at the site to add further appeal for residents and visitors.  The pergola was constructed by Jaason Bishop of Backyard Creations & More in Imlay City.
Imlay City Downtown Director Lorrelei Natke describes the butterfly garden as a yet-to-be-discovered oasis for many Imlay City residents.
“I think a lot of people don’t even know the butterfly garden is there,” she says. “It is a place that is meant to be visited, used and shared by our residents.
“The garden is quiet, serene and peaceful,” Natke adds. “It’s a place where people can go to eat their lunch, read a book, meditate or simply gather their thoughts.
“It’s a very special place in Imlay City,” she says. “And it’s something that is unique to this community.”