Some 22 new homes being

ALMONT — Construction has begun to add 22 new single-family homes within the Almont Village limits.
Village officials report that the seventh and final phase of Stroup Builders’ K-Lynn subdivision, which dates back to the late 1970s,  is now underway near the intersection of June Drive and Dawn Drive. 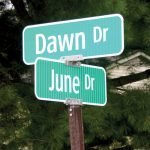 Construction is now underway south of the intersection of Dawn Drive and June Drive.

Almont-based businessman Jim Novak is serving as both the developer and builder at the 11.25-acre property, which is located north of the nearly filled-to-capacity Drakeshire Subdivision, east of Kidder Rd.

As the first step in the project, Novak is installing new infrastructure at the site to include new water and sewer pipes, manholes and water main valves.
Doug Skylis, Project Engineer for Rowe Professional Services, said that portion of the project should be finished soon.
“I believe he’s (Novak) looking at putting in all the infrastructure, grading and roads in by this fall,” said Skylis. “Actual construction of homes could still begin by late this year.”
Almont Village Manager Mike Connors said the new development will add to the village’s tax base and likely to the Almont school district’s student population.
Connors said he sees some obvious benefits from new residential construction for the community-at-large
“This is welcome news and it’s positive for the community,” said Connors. “In addition to bringing in increased tax revenues for the village, it is encouraging to see more new families coming into town.
“It should mean more students in our schools and be a benefit to the local business community.”
Connors said Novak was expected to be present at Tuesday’s (Aug. 20) Almont Village Council meeting for the purpose of requesting a waiver or reduction in water and sewer tap-in fees for the project.
Tap-in fees for 1-inch diameter lines would typically cost the builder about $2,100, while 6-inch lines cost $2,250.
Connors said the village’s combined fees for water and sewer tap-ins would cost $4,583 per unit. Based on all 22 residential units, that figure would translate to $100,826 in tap-in fees being paid
to the village by the
builder.