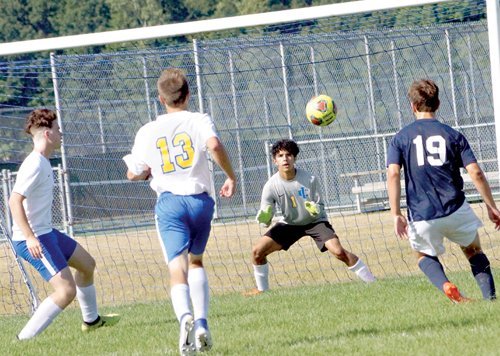 Imlay City goalkeeper Jose Salcedo looks to make a save Saturday versus Berkley. Salcedo went the distance in goal and was credited with 17 saves in the Spartans’ opener.

IMLAY CITY — The Imlay City boys’ soccer team went 0-1-1 en route to a second place last Saturday at an invitational it hosted.
Imlay City opened tournament action with a 2-0 setback to Berkley.
That clash went in to the half tied at zero goals apiece.
Berkley then outscored Imlay City 2-0 from that point on, earning a 2-0 win.
Jose Salcedo went the distance in net for Imlay City. He was credited with 17 saves.
Imlay City would play much better in their second tournament clash.
It was there Imlay City and Warren Woods Tower concluded their encounter with two goals apiece.
Arturo Gonzalez and Sergio Galeana led Imlay City with a goal each.
Salcedo drew the goalkeeping assignment for Imlay City again. He finished with 10 saves.
Imlay City returns to action this Thursday when it travels to West Bloomfield. The matchup lists a 7 p.m. starting time.