Mother of children lost in fire

IMLAY CITY — Krystal Whitney, the mother of the four children who perished in a mobile home fire at Maple Grove Estates is expressing her deep gratitude to the individuals who responded to the fire in the early hours of Feb. 26, 2019.
She also wants to personally thank the community for its generosity and emotional support in the days and months since the tragic event.
Both Krystal and the children’s father, Keith L. Kelley, Sr., were present for a memorial to honor their deceased children on Saturday at Lamb Steele Park in Imlay City.
Joining them for the memorial, which was coordinated by Christina Muir Murphy of Roth-Muir Funeral Home of Romeo, were numerous family members, neighbors and other special invited guests.
Also present was the couple’s lone surviving child, KeyShawn, 2, who continues to recover from his fire-related injuries. 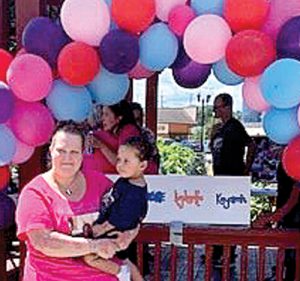 Krystal Whitney poses with surviving son KeyShawn at Saturday’s memorial for his four siblings who were lost in a fire.

Krystal said she and Keith Sr. are gradually recovering from the burns and associated physical trauma from the fire, but they continue to struggle emotionally.
“Keith and I are doing well and recovering from our physical issues, but not so much emotionally,” she said. “It’s a struggle every day. I’d hoped it would get easier—but it just gets harder.”
Krystal said KeyShawn, who suffered two fire-related strokes, is recovering at a much slower rate—though he is beginning to make progress.
She said the strokes impacted his brain function, resulting in vision issues and limited use of the right side of his body.
“KeyShawn is now able to put weight on his right foot and is walking on his own,” said Krystal. “But he’s still not able to use his right arm at all.
“He’s going to need a lot of therapy and he still has a long way to go in his recovery.”
While recovery is the goal of all three survivors, Krystal reiterated her wish to express thanks to the community for stepping up to assist the family.
“I really want to thank the people in this community who have had our backs,” she said. “To let them know how thankful we are and how much we appreciate their support.
“So many people have been kind, supportive and generous with their donations—which have helped us get back on our feet,” she continued. “There is no way we can ever thank them enough.”
Krystal expressed special appreciation to those who responded on the morning of the fire.
“We want to thank all of the first responders, the police, the firefighters, EMS, doctors and everybody who did all they could to save our kids. We thank you.”