memorial to thank community for support

IMLAY CITY — There is no way to measure the pain and suffering a parent endures with the loss of a child.
Nor can the severity and duration of that pain and suffering ever truly be known, except by the sufferers.
For Krystal Whitney and Keith L. Kelley, Sr., who on Feb. 26, 2019, lost four children during and in the aftermath of a house fire at Maple Grove Estates, there may seem no end to the anguish.
The couple’s deceased children are Keith Lemont Kelley II, 6; Keyondre Lee Kelley, 5; KeyannaRae Irene Kelley, 3; and Keyairah Jane Cheyenne Kelley, who was just 28 days old the morning of the fire.
Remembering
On Saturday, Aug. 10, Krystal, Keith and their surviving child, 2-year-old KeyShawn Kelley, returned briefly to their former hometown of Imlay City, where their two older children had attended school.
Among those gathered at Lamb-Steele Park to remember and celebrate the lives of the four children who perished in the fire were invited family members, neighbors, close friends and classmates of the couple’s two older children. 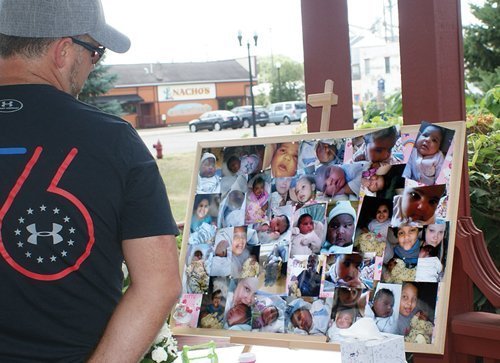 Visitor pauses to remember the Whitney-Kelley children whose lives were lost in a tragic February fire at the Maple Grove Estates mobile home park Imlay City.

Some family members expressed hope that the memorial can be an important step in allowing the parents to begin finding closure to the terrible tragedy that has permanently altered their lives.
Beneath the Lamb-Steele Park gazebo on Saturday, guests could step in and view large photo collages of each of the deceased children. Many paused briefly in prayer or to share comforting words with one another.
Outside the gazebo, some older children took turns creating chalk drawings with uplifting messages in memory of the children. Younger kids gathered around a clown who was making balloon animals, or played in a  large bounce house set up on the park’s grounds.
Adults sat beneath a large tent or clustered around tables set up beneath the park’s shade trees.
Nearly everyone took advantage of the cuisine being dished out by staff and owners of the Four Corners Diner of Romeo.
Time for thanks
Krystal Whitney’s sister, Jessica Mahan of Millington, said the memorial was a chance for family members to thank the Imlay City community for its overwhelming emotional and financial support after the fire.
“This community has done so much for our family,” Mahan said. “Today is an opportunity for us to reach out and thank everyone who has offered their support and shared in our grief.
“For the family, it’s a chance to come together and celebrate the lives of my nieces and nephews.”
Christina Muir Murphy of Roth-Muir Funeral Home in Romeo, who donated services for the memorial, noted that the event was limited to guests by invitation only.
“It was a matter of protecting the privacy of the family members,” said Muir Murphy. “Everyone is searching for some degree of closure to this tragedy, but especially the parents who continue to struggle through this ordeal every day.”
Among those present for the memorial were  Imlay City Fire Chief Rick Horton, Police Chief Scott Pike and Firefighter Craig Ross.
Horton and Ross presented the couple a wood plaque affixed with a traditional fireman’s axe that will eventually hang in Imlay City’s new fire hall being built on East Borland Road. Horton said the plaque will have a permanent place in the future fire hall as a way to remember the children.
Further recognition
On behalf of the children’s parents and families, Kristina Muir Murphy acknowledged the following individuals and businesses who donated to the children’s memorial.
“It is with gratitude and sincere appreciation of the generous outpouring of love since our tragic loss in February. Your efforts for today’s Celebration of Live Memorial has truly touched our hearts and will never be
forgotten.
“Thanks to: Imlay City Police Dept., Imlay City Fire Dept., First Responders and emergency personnel from Lapeer County and surrounding communities; Imlay City Manager Thomas Youatt; Imlay City Commission; Imlay City Parks & Recreation; I.C. Pool Director Jeanette Farley; Joi Kempf/Imlay City Florist; Mandy J. Florist of Almont; Rebecca Homer/Print Shop; Country Smoke House/Sue Francis; Marty Hutnick of Four Corners Diner; local artist Robert Edmunds;
North Branch Rent-all; Burke’s Florist of Lapeer; Tuzinsky Family/Michigan Outpost; Imlay City Kroger; Muir Brothers Funeral Home-Almont; Roth-Muir Funeral Home-Romeo; and the Muir Funeral Home & Celebration of Life Center-opening soon in Imlay City.”
For complete obituaries for the Whitney-Kelley children, turn to page 11-A.