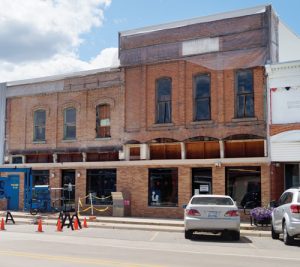 Work is underway to restore the historic brick facade of the two Main Street buildings that the Capac Library calls home.

CAPAC — The final phase in the expansion and renovation of Capac Library is now underway.
Last week, crews from Sanctum Contracting removed plastic sheeting from the front of the Main Street buildings and began repairs to the brick facade.
The Yale-based company was awarded a $106,000 bid earlier this year for the project.
The work is being paid for with a combination of grant dollars and funds raised by the Friends of the Capac Library group.
Last year, the Community Foundation of St. Clair County presented $40,500 to the Friends group for their Capac Friends: Plastic Ends campaign. The plastic was in reference to the plastic sheeting that’s covered the historic brick facade on the upper portion of their Main Street buildings since 2015 when metal sheeting was removed.
The Friends group was successful in reaching their matching grant goal one year ago.
The work will encompass brick repair, replacement of two cornices, new upper windows, new awnings, new lighting and more.
The buildings are owned by the village, occupied by the county’s library system and financially supported by the Friends group, a 501c3.
The renovation and expansion of the library facilities was started in 2013 when the village purchased the building at 113 N. Main Street, immediately adjacent to the existing library facility and transformed the new space to include a meeting room, maker space plus host a portion of the branch’s materials.
The library remains open to patrons during the building project.